I am preparing information on the rainbow trout, as a s 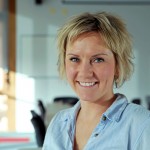 pecies, for inclusion in my dissection video. This information will appear on a panel to the right of the video, and will change as the film moves forward. I have ordered a drawing tablet and will create simple drawings of the rainbow fish organs, which will be highlighted throughout the dissection video. With only a month until the final presentation, Patrick and I will be very busy with editing and preparation of the video in the next few weeks. For updates keep an eye out for more blogs which I will post in the champions blog section of the website. 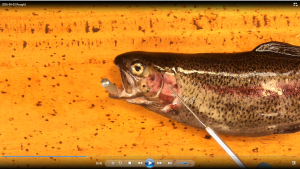 Patrick and I booked a slot with the filming studio/green room in the Audio Visual Media Services Department, UCC. Michael Tobin set up the room and cameras that day, and carried out the filming.

I had to give and Introduction to the video, which proved to be more difficult than I first thought. I have a lot of experience in lecturing, presentations and teaching, but remembering, and saying, set lines is a different kettle of fish (pun – sorry!). I found I was going blank on certain sentences, which has never happened to me before. I think it was because I usually get my main points across in my own words, with a certain amount of ad lib. Eight takes later, and we had the full introduction filmed.

Recording the audio track for the video was much easier, though it may be challenging to match the audio overlay to the video, especially where I point to certain features during the dissection.

I drove to Tipperary first thing in the morning, to buy rainbow trout from John Hayden at the Araglen Valley Trout Farm, Ballynamuddagh, Araglen, Kilworth, Co. Cork. The trout farm is set in a beautiful valley, and has a lake for fishing in the summer.

When I got back to the School of BEES in UCC, Patrick Cross, Sophie Gahan and I constructed a set for the trout dissection. Tom O’Mara arrived to give final recommendations on lighting and positioning. We used one of the School’s wooden dissection boards. The grain of the wood looked very well on film, under the lights.

I had bought 6 fish and we rated them on ‘fishy attractiveness’, depending on their size, colouration and general appearance. I dissected the smallest female first, as a trial. The largest, most colourful fish was used for filming. This female fish was gravid, and the orange eggs looked great on film.

The dissection itself took a short time, but we filmed the dissection of four fish in total, and plan to edit the best bits together for the final cut.